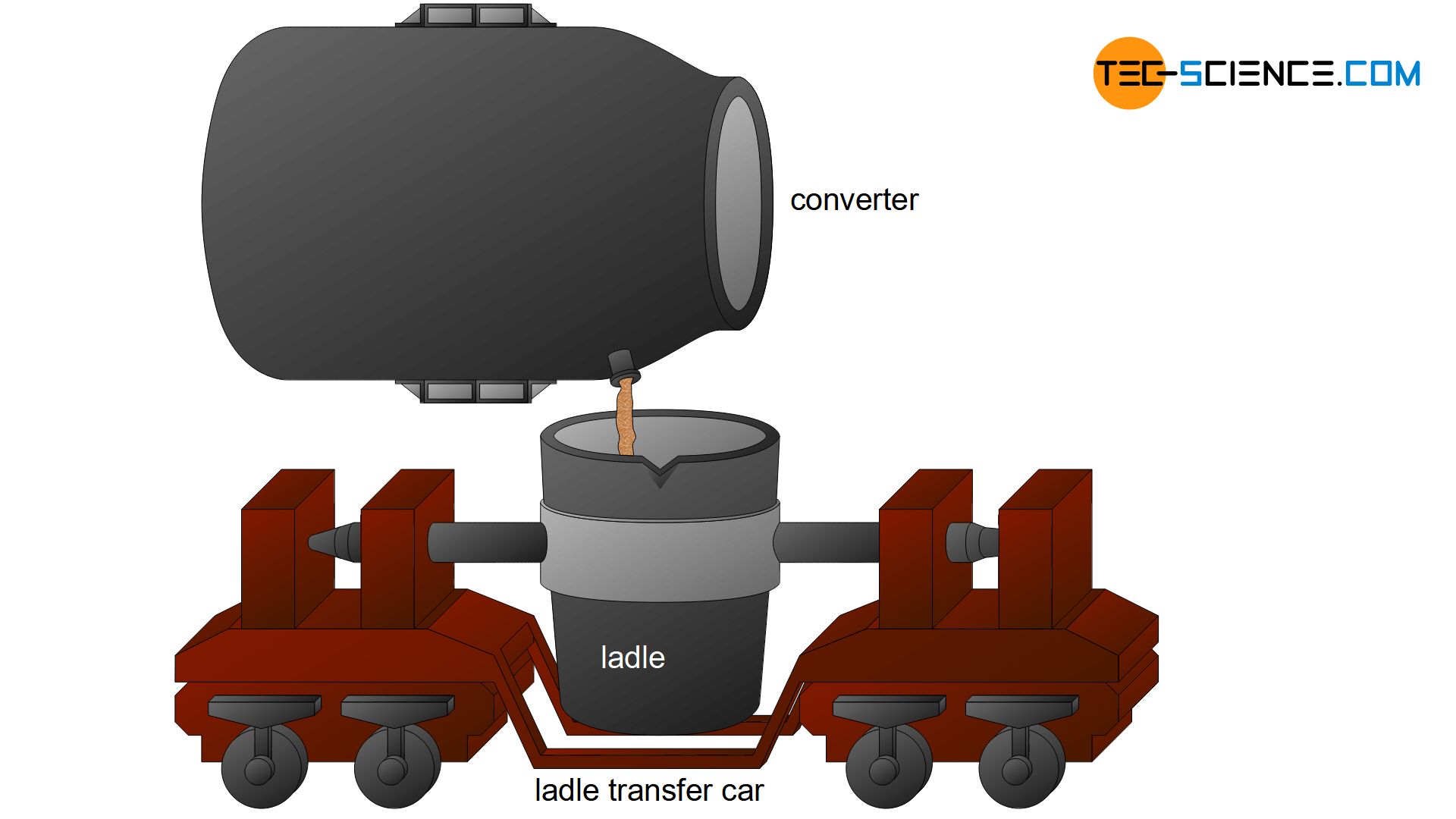 After the pig iron has been tapped, it must be desulfurized and oxidized with oxygen (refining) to obtain crude steel.

Due to its high carbon content and relatively high concentrations of phosphorus and sulphur, pig iron is generally very brittle and is not suitable for forging or welding. Therefore, the pig iron must be post-treated to produce the actual steel with its typical forging and welding properties. This aftertreatment takes place in steelworks (steel mill) whose main task is to reduce carbon to the desired level of less than 2 % and to remove the contaminants such as sulphur, phosphorus and nitrogen as far as possible (and, to a certain extent, silicon and manganese).

The sulphur has a particularly detrimental effect. It leads to the formation of iron sulfide, which forms a low-melting mixture in combination with oxygen. The iron sulfide segregates at the grain boundaries of the austenite grains during subsequent hot forming in the range of 800 °C to 1000 °C and thus leads to embrittlement of the microstructure. Since the fracture surface of a steel broken at these temperatures is red-hot, this type of fracture is also known as red shortness. From a temperature of 1200 °C the iron sulfide inclusions even begin to melt and thus also lead to breakage. This is then referred to as hot shortness.

In order to avoid red and hot shortness, steels must therefore generally be low in sulphur (exception: free machining steel). In addition, manganese is usually added, which then binds the sulphur to itself in the form of manganese sulphide and is therefore not present in the harmful form of iron sulphide.

Pig iron is too brittle to be used as a construction material due to its high carbon and sulphur content! Pig iron must therefore be desulphurised and decarburised!

The refining of pig iron into steel is carried out in liquid form. For this purpose, the pig iron produced in the ironworks is first collected in large mixing containers (called pig iron mixers) with a capacity of up to 1800 tons. Several pig iron tappings are mixed in it to compensate for differences in composition and thus provide the steelworks with a constant quality.

With manganese-rich pig iron, pre-desulfurization already takes place without any further action, as the sulfur has a greater affinity to manganese than to iron. Ferromanganese additives enhance this effect. During this so-called manganese desulfurization, the iron sulfide (\(FeS\)) forms manganese sulfide (\(MnS\)) in the pig iron melt:

The manganese sulphide, which is insoluble in liquid pig iron, is deposited as slag on the melt. In principle, however, it is not possible to remove all the sulphur from the melt because the reaction equilibrium is shifted to the left at high temperatures (which are necessary to keep the pig iron liquid).

For this reason, calcium oxide or calcium carbide is added to the pig iron before it is transported to or in the steel mill and thus desulfurized (called lime desulfurization). The iron sulfide (\(FeS\)) contained in liquid pig iron essentially reacts with the calcium oxide (\(CaO\)) or calcium carbide (\(CaC_2\)) to form calcium sulfide (\(CaS\)). Magnesium oxide (\(MgO\)) has the same desulfurizing effect. High temperatures in particular favour this form of desulphurisation. The chemical equations for this are as follows:

The calcium or magnesium sulphide formed is then bound in a basic slag. Basically, only slags made of basic compounds can bind acidic substances such as sulphur (and phosphorus). Depending on the process, the sulfur content in pig iron can be reduced to up to 0.001 %.

The largely desulphurised pig iron is further processed in the steel mill itself. If it is not an integrated steelworks, the pig iron may have to be transported several kilometres from the smelter to the steel mill. This usually takes place in so-called torpedo cars, which are located on railway tracks.

This means of transport owes its name to its elongated torpedo shape. The capacity of such a torpedo car is about 300 tons. The refractory lined wagons allow the pig iron to cool only minimally on its way to the steelworks (approx. 10 °C per hour). The still molten steel can then be further processed in the steelworks.

Once the molten pig iron has arrived in the steelworks after desulfurization, it is further processed into (crude) steel. At first one makes use of that the accompanying elements, such as phosphorus, which are still present in undesirable amounts, but also elements such as carbon, silicon and manganese, which are present in excessive concentrations, have a greater affinity to oxygen than iron.

This offers the possibility of burning the accompanying elements in the liquid pig iron relatively simply with the supply of oxygen. This causes the unwanted substances to oxidise and are bound or gasified in a slag-forming layer. In contrast to pig iron production in the blast furnace, the combustion process at this point does not involve carbon, as this is to be partially removed from the pig iron, among other things.

In the past, fresh air was blown into the pig iron melt for oxidation. In the course of time, different refined processes have developed, many of which are no longer up to date. Therefore, the most important process, the oxygen converter process (basic oxygen steelmaking), is described in more detail below.

In the oxygen converter process, the pig iron is first filled into huge crucibles with a capacity of approx. 300 t, so-called converters. Oxygen is then blown through a water-cooled copper lance onto the pig iron melt. This process was first developed in the Austrian cities of Linz and Donawitz, which is why it is also known as the Linz–Donawitz-steelmaking (LD-steelmaking).

The carbon and undesirable elements are oxidized out of the pig iron by the injected oxygen. The melt is mixed by the high blowing pressure and the violent oxidation that sets the pig iron melt in motion. With the aid of lime fluxes, the oxides formed are then bound in a basic slag or converted to the gaseous state.

The oxidation of the accompanying elements takes place via the formation of liquid iron oxide (\(FeO\)), which is formed by oxygen (\(O_2\)) on the pig iron (\(Fe\)):

The extremely exothermic oxidation of the accompanying elements ultimately resembles a combustion process. The temperature of the pig iron melt rises from 1250 °C to over 1600 °C. For this reason, approx. 20 % iron scrap is added for cooling in order to protect the converter lined with stones from excessive temperatures. Iron ore or sponge iron (from the direct reduced iron process) can also be used for cooling.

After 20 minutes of oxygen supply, the decarburized melt is then called crude steel. For further refinement, the crude steel is poured into ladles. This further treatment is also referred to as secondary metallurgy and is dealt with in the following chapter.

With basic oxygen steelmaking (oxygen converter process), oxygen is blown onto the liquid melt and carbon and other elements are oxidized! Scrap is added for cooling!