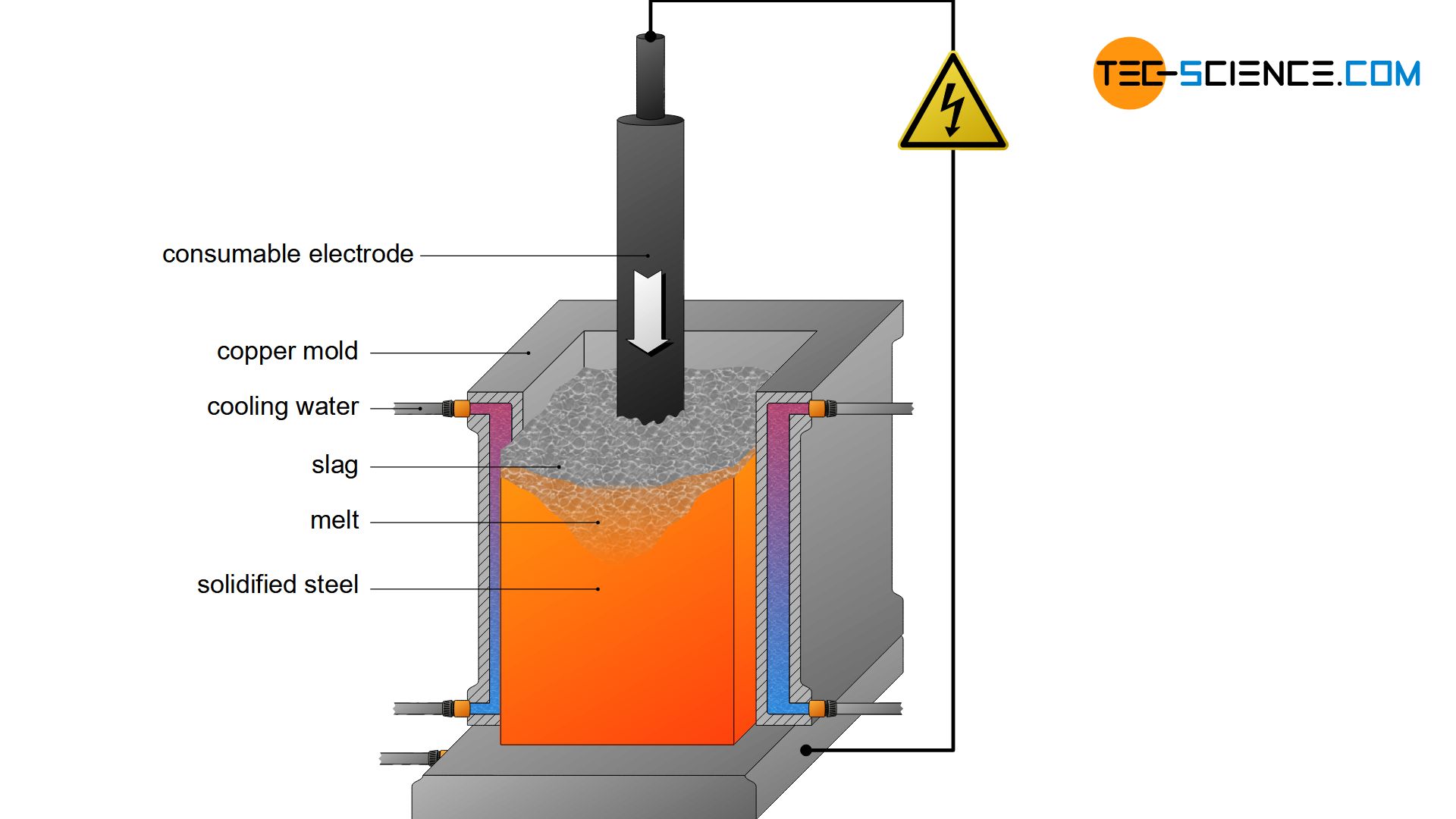 In order to meet today’s requirements for steels, crude steel must be further treated by various processes after it has been refined.

In the early days of steel production, the crude steel was cast immediately after refining through oxygen and was ready for sale. Over the course of time, however, the demands on the steels have increased more and more. Especially low concentrations of phosphorus, nitrogen and oxygen have become indispensable nowadays. The required quality can only be guaranteed by further post-treatment procedures.

For these processes, the fresh crude steel is tipped in the converter and poured into so-called ladles. This is why secondary metallurgy is often referred to as ladle metallurgy.

Secondary steelmaking (ladle metallurgy) is used to refine steels to meet the most diverse requirements!

In the previous article, the most important equilibrium reactions during refining through oxygen were explained. In particular, the reaction of iron oxide (\(FeO\)) with carbon (\(C\)) to iron (\(Fe\)) and carbon monoxide (\(CO\)) is particularly important for the oxygen content of the later steel:

Since this chemical equation is an equilibrium reaction, oxidized iron (\(FeO\)) always remains dissolved in the melt. According to the equation (\ref{1}), only little oxygen in the form of carbon monoxide can escape from the melt, especially in low-carbon melts. The liquid crude steel then contains a great deal of dissolved oxygen. In the solidified state, in conjunction with sulfur, this can lead to an increased tendency to hot shortness during hot working, since the iron oxide \(FeO\) formed reduces the melting temperature of the already low-melting iron sulfide compound even further.

In addition, the oxygen “boils” out in the form of carbon monoxide when the steel solidifies. This leads to gas inclusions and thus to pores. The boiling out of carbon monoxide is due to the fact that the carbon content in the residual melt increases during solidification (see iron-carbon phase diagram). In order to maintain the chemical equilibrium, according to equation (\ref{1}) carbon dioxide is thus formed more often, which then rises gaseously upwards. Gas pores would also form when a welded joint solidifies again. This is why such oxygen-containing steels are not suitable for welding. For this reason, the oxygen must be removed from the crude steel as far as necessary after refining through oxygen by subsequent deoxidation.

A high oxygen content in the steel leads to the formation of gas bubbles during solidification and thus to pores. Crude steel must therefore be deoxidized before solidification!

In the case of rimmed casted steels, only manganese (\(Mn\)) is added, which not only binds the oxygen but also converts the sulphur sulphide (\(FeS\)) contained in the steel into manganese sulphide (\(MnS\)), which reduces the danger for red and hot shortness:

In the case of half-killed steel, silicon is added acording to the following chemical equilibrium equation:

In the case of killed steel, aluminium is also used, whereby the reaction takes place almost completely in favour of the aluminium oxide. Almost all the oxygen remains bound in the crude steel in the form of aluminium oxide and does not gas out during solidification:

Not only oxygen but also other gases such as nitrogen (from the air) are absorbed by pig iron during refining through oxygen. The nitrogen content must also be subsequently brought below the required maximum value, as steels containing nitrogen tend to age.

Ageing is the embrittlement of steel over time. The cause of embrittlement is that nitrogen can be dissolved at relatively high temperatures but remains practically insoluble at room temperature. Thus, the (forcibly dissolved) nitrogen will precipitate in the steel structure over time as iron nitride. These precipitates hinder in particular the dislocation movement necessary for deformation – the steel becomes brittle.

Steels that should not show any signs of aging must therefore be low in nitrogen. Nitrogen uptake was a major problem, especially in the early days of steel production, when nitrogen-containing air was still being used for refining through oxygen. This is why the refining process is today carried out with technically pure oxygen, whereby nitrogen is always absorbed.

At this point, aluminium, which is used for the production of killed steel, offers additional advantages. The added aluminium combines with the dissolved nitrogen to form aluminium nitride and thus makes it harmless to ageing:

The aluminium nitrides also promote nucleation during solidification and retard grain growth so that fine-grain steels suitable for welding can be produced (weldable fine grain steels).

However, killed steel can have a disadvantage regarding the surface quality, which is why in some cases rimmed steel is used, e.g. for the production of deep drawing sheets (more on this in the article here). Casting killed steel can also lead to reinforced interior cavities (closed cavities), which have to be separated later and thus represent rejects.

In a similar way to nitrogen, other gases, such as hydrogen, have an embrittlement effect in steel (called hydrogen embrittlement). In principle, the dissolved gases should therefore be removed as far as possible from the liquid crude steel.

To achieve this, the property is used that the solubility of gases depends on the external pressure. The lower the ambient pressure, the fewer gases can be dissolved in a liquid. Degassing of the liquid crude steel can therefore be achieved by exposing it to a strong negative pressure (“vacuum“). This is exactly what vacuum treatment does. The gases such as hydrogen, nitrogen and oxygen, some of which are no longer soluble, rise in the melt and can be slagged.

Unwanted gases can be removed from the liquid crude steel with a vacuum treatment!

Since some of the oxygen in crude steel is also degassed during vacuum treatment, deoxidation also occurs. A strong decarburization effect can also be achieved by the vacuum treatment, since the chemical equilibrium shifts to the right according to the equation (\ref{1}). As a result, the carbon can no longer be dissolved to the same extent in the melt and rises as carbon monoxide. Such fine decarburization is necessary for some stainless steels, some of which have carbon concentrations of only 0.01% (e.g. X1NiCrMoCu25-20-5).

The electro-slag remelting process (ESR process) provides even greater purity than degassing by vacuum treatment. For this purpose, the crude steel is first cast into a cylindrical form and solidified. The solidified steel cylinder then serves as a melting electrode for a high-voltage source. The second electrode is formed by a mould containing a slag bath consisting of lime and alumina. The slag also serves as electrical resistance.

The crude steel electrode is now approached from above the mould electrode and an arc is ignited. The steel cylinder begins to melt due to the high temperatures and drips onto the liquid slag. When passing through the slag, the undesirable substances are removed from the liquid steel. The cleaned steel then solidifies in the water-cooled mould, while the slag moving upwards with the solidification front of the steel.

Electro-slag remelting can also be carried out under vacuum, so that a degassing effect occurs at the same time. This combined process is then referred to as the vacuum arc remelting (VAR), which is used for particularly high-quality stainless steels.

An important task of secondary steelmaking is the adjustment of the steel composition (adjustment of the analysis). This is done by adding alloying elements such as titanium, chromium, nickel, molybdenum, vanadium, tungsten, etc. In the electric steel process, high-melting elements may already be added directly in the arc furnace or induction furnace.